The quote is originally from Mark Twain, quoting a student:

“Climate lasts all the time and weather only a few days”.

In 1901, geographer Andrew John Herbertson wrote in his book ‘Outlines of Physiography’:

“By climate we mean the average weather as ascertained by many years’ observations. Climate also takes into account the extreme weather experienced during that period. Climate is what on an average we may expect, weather is what we actually get”.

In 1973, Robert Heinlein wrote in his novel ‘Time Enough for Love’:

Weather describes current atmospheric conditions, such as rainfall, temperature, and wind speed, at a particular place and time. It changes from day to day.

Climate is the average (or ‘normal’) pattern of weather for a particular place over several decades. Changes in climate are hard to detect without very long-term records.

One way to understand the difference between weather, climate variability and climate change is to think about how they operate on different time scales. 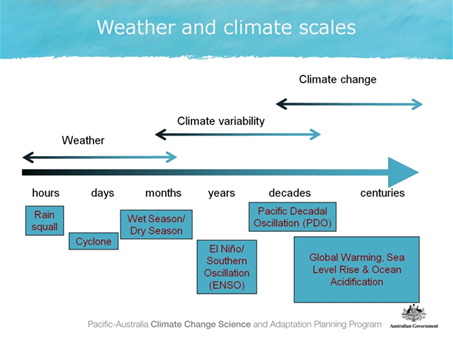 In the figure, weather events such as rain storms might last one or two hours and tropical cyclones may last days. Climate variability can be defined by climate patterns such as the El-Niño Southern Oscillation. Climate change refers to things which happen over centuries, like global warming.