This article was published by Business Insider:

“Experts say the amounts of sargassum washing to shore could only get worse because of climate change, destroying entire ocean ecosystems as more algae grows and spreads.

You have to read until the end of the article to get to what REALLY causes the increase in Sargassum:

This phenomenon may be due in large part to deforestation efforts in the Amazon rainforest. Runoff may have put nitrogen and other nutrients into the ocean and lead to an overgrowth of sargassum, that once grabbed by currents, finds its way to popular beaches. Even more worrisome is the sargassum’s ability to change oxygen levels in the ocean and destroy entire ecosystems in the process.

Scientists also believe climate change could have lead to the increase in sargassum, although they aren’t yet positive.

“Because of global climate change we may have increased upwelling, increased air deposition, or increased nutrient source from rivers, so all three may have increased the recent large amounts of sargassum”, Chuanmin Hu, a professor of oceanography at South Florida University’s College of Marine Science, told Associated Press.

Why would ‘Climate Change’ increase nutrient source? The increase in nitrates comes from agricultural fertiliser.

We check the original article in the Wall Street Journal: 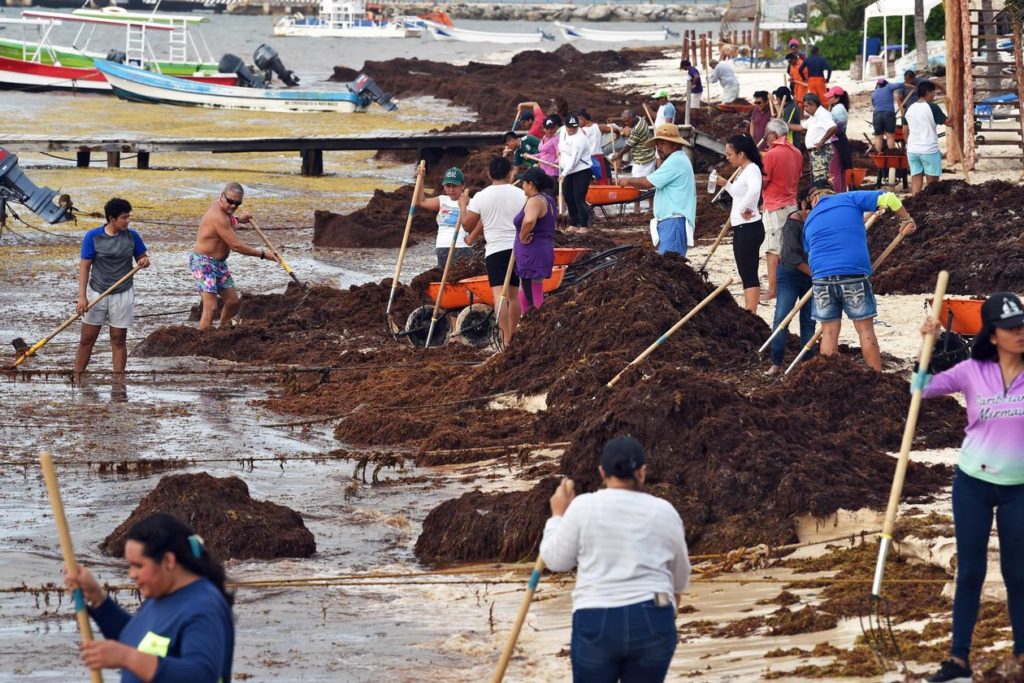 Hotels are hiring people to cart it away

Scientists believe deforestation in the Amazon to clear the way for farming and subsequent runoff from agricultural fertilizers there and elsewhere have poured nitrogen and other nutrients into the ocean, causing the explosive growth in algae. Ocean currents then deposit sargassum on beaches, where it decomposes and alters oxygen levels in the ocean, putting entire ecosystems at risk, experts say. Scientists haven’t concluded what effect warming seas has on the seaweed.